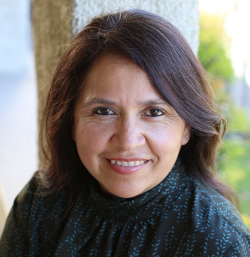 Sonia Lopez has 17 years experience working within residential, inpatient and outpatient settings with individuals, children, families, couples, adolescents and adults of diverse socio-economic and ethnic backgrounds. Her approach is client-centered. Clients can expect to find a compassionate, kind, and supportive atmosphere. Sonia believes that the therapeutic relationship is essential in the development and outcome of clinical treatment. As your therapist, her goal is to assist you in gaining awareness into your own internal struggles, acknowledging your life experiences while exploring how your past currently influences your current choices and outlook on life.

In 2005, Sonia earned her Master of Arts Degree in Marriage and Family Therapy from Antioch University of Santa Barbara. Antioch University is an independent, non-sectarian college, which promotes experiential learning, social justice and draws on the strength of a diverse academic community. During her attendance at Antioch, she interned at Pacific Pride Foundation, which provides services to the HIV/AIDS and Lesbian, Gay, Bisexual and Transgender communities of Santa Barbara County. She also gave there time to volunteer for Models of Pride, an organization that focuses on the concerns and interests of Lesbian, Gay, Bisexual, Transgender and Questioning (LGBTQ) community and their allies.

In addition to her psychology background, she attended California State University of Northridge where she attained a Bachelor’s Degree in Communication Studies with an emphasis in Radio, Television and Film. Sonia’s experience within the entertainment industry has led her to understand the particular issues faced by individuals within or attempting to break into the industry. During her studies, she was employed by Anita Santiago Advertising, as well as, worked in the Public Relations Department for Univision, the largest Spanish-language television network in the United States. Prior to pursuing her psychology degree, she held a position as a Production Assistant for Radio Express, and international radio syndication that is a leader in worldwide radio syndication.